John Alexander Rogers, Jr. was born May 14, 1817, in Rogersville, Hawkins County, Tennessee.  First serving as a courier to Stephen Austin and Sam Houston in 1835-36, he was a soldier for the Republic of Texas Army until 1845. He brought his wife and family to Harper in 1876.
John died January 22, 1886, and was buried here, just a few years after the first post office was established. Prior to his death, Rogers deeded 2 1/2 acres for the Harper School on Jan 30, 1885.
His widow, Mary Williams Rogers, deeded his grave site along with 3 acres to establish the Harper Cemetery on June 26, 1897.

May be used when sending a gift or memorial for the cemetery. 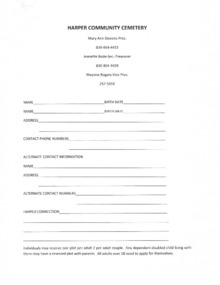 On-line memorials with photographs, bio-info, and family connections of the deceased   https://www.findagrave.com/cemetery/2138652/harper-community-cemetery
Contact Mark at mvschump@aol.com  to edit errors you see on findagrave, or to add photos you would like to see on a loved one's memorial. There is no fee for this service.

About the Harper Community and Chamber of Commerce

In the last 20 years as people from Austin, San Antonio, and other cities have become interested in getting out of the frenetic pace of city life, Harper and nearby communities in the Hill Country have seen a steady rise in population. Some come here to set up new businesses, others enjoy the lower cost of living and short commute to larger cities.

Harper is served by the 2A Harper Independent School District which features pre-kindergarten through twelfth grades. Community involvement and support in school activities and sports gives children in Harper a solid foundation and sense of belonging that many students in larger schools do not get to experience.